I recently revisited a painting, Jean Warin instructing the Young Louis XIV in the appreciation of medals (ca.1645), at the Monnaie de Paris. I have been thinking about that picture for many years now. Looking closely at the strange double portrait, and the coins and medals in its boarder, has prompted me to extend the analysis I published in my book Antiquarianism and the Visual Histories of Louis XIV (2015). I include here new specifications about the sources for ancient coins and modern medals in the border with additional illustrations.

Jean Warin instructing the Young Louis XIV in the appreciation of medals, ca.1645, attributed to a lesser-known artist François Lemaire, shows the celebrated medal-maker Warin and Louis as a child.[i] Warin was a fine engraver and celebrated sculptor and his expertise in engraving dies for struck medals established his monopoly as royal medalist, working for both Louis XIII and his son.[ii] Evidently he had refined his own numismatic practice through a study of ancient coins, and many of his designs emulated classical precedents. This equipped him with knowledge of numismatics that he could pass on to his royal patron, a mutually beneficial exercise that would enable him to form a close relationship with the monarch, and ensure the continued support of his profession.

A border of assorted coins and medals frames the two figures in Lemaire’s painting—a curious later addition of the 1660s—evokes the role that this lesson in history played in the formation of the future king.[iii] Louis at seven is depicted to the right of the main panel, but above him, top center, he appears as a young man.

It is accompanied by other numismatic portraits of celebrated heroes of the ancient world:

(Top left) Alexander the Great: deified on an 3rd century Imperial Roman coin (coin of the Macedonian Koinon). It is likely that the artist or patron thought this to be an ancient Greek coin of Alexander. 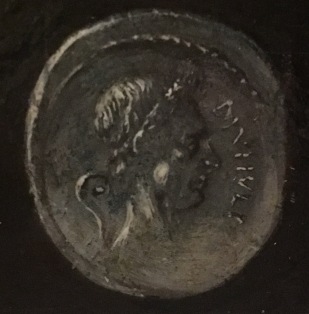 Warin’s medal takes pride of place among these great men at the central apex of the panel. The addition of these coins and medals brings reflected glory to Warin, who likely commissioned this painting, with his portrait of his famous patron occupying a central position within medallic history. By placing the king among such illustrious predecessors from the ancient and recent past, Louis XIV is presented as the inheritor of their glory and their historical agency. Just as Caesar determined the narrative of ancient Rome, Louis XIV would forge the path of history in his own time. 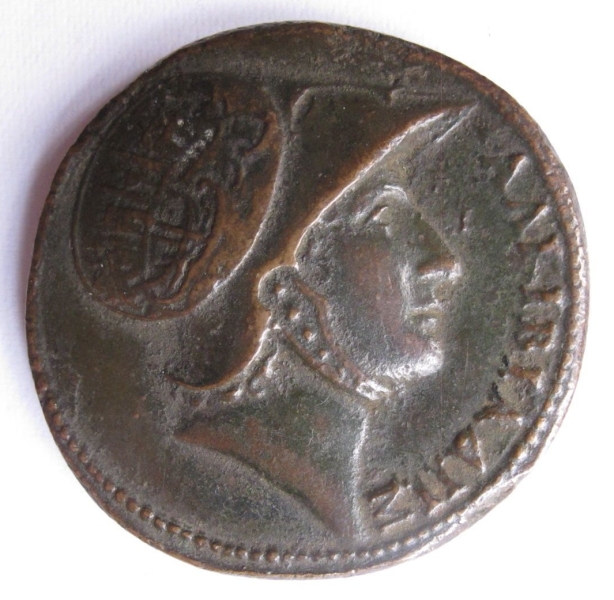 Warin holds a medal in one hand that he points to with the other, and the gesture invites comparison between the subject of this portrait and the young king. It is a modern medal by Valerio Belli from the early 16th century that depicts the ancient Greek general Alcibiades. However, it is possible that seventeenth-century painter or painter responsible for its inclusionthought it to be Alexander the Great.[vi] The life of Alexander would have provided many scenarios for the young prince to ponder and hone his own skills at decision making, and leadership, which Jacques-Bénigne Bossuet (1627–1704) would later argue was the purpose for the study of history by princes.[vii] Indeed, the ancient Macedonian general would become the young king’s alter ego, with Charles Le Brun’s famous Alexander paintings of the 1660s long thought to allude to the French king.[viii] With the later addition of Warin’s 1663 medal of Louis XIV, the medalist’s upward-pointing gesture emphasizes the symbolic function of this coin drawing a connection between it and that of his patron—the new Alexander.

The temporal distance between child and adult, ancestor and ancient precedent are collapsed within the unifying field of the painting. An Arcadian landscape provides the perfect ahistorical backdrop. The young king and his instructor have left the present through their study of medals, the usual constraints of time no longer apply to them, and they are able to move freely from past to present to future by way of the medals before them. Here the medal is presented as a conduit in history—a token that could transport its bearer to another time.

When medals such as those were assembled in an amateur’s cabinet they would provide a retreat from the present. The cabinet was an atemporal realm where chronologies and histories could be assembled tray by tray.[ix]

Coins and medals from the ancient and modern world could be selected at will to invite comparison between figures of the present and the past; those that they would hope to emulate, and those whose crimes and errors must be avoided. Seventeenth-century French antiquarian Charles Patin described medals as a means “by which we are made aware of the rules that form our moral philosophy,” through the example of those who came before. [x] A collection of medals was a visual and tactile library of history where the numismatist could select a piece, examine it, and have seemingly unmediated access to the time from which it came. Such was the utility of numismatic collections in seventeenth-century France. They were a resource through which the grand narrative of history could be assembled and discoursed upon, for study and leisure.

Text adapted from: Robert Wellington, Antiquarianism and the Visual Histories of Louis XIV: Artifacts for a future past. (Ashgate, 2015),

[iii] Radiography has revealed that the six medals in border of this painting were a later addition. It has been suggested that this painting was commissioned by Warin in ca. 1645, but that the other medals were added to the border in the 1660s after the medalist had produced. See: Desnier and Robert, “L’art de la médaille selon Jean Varin.”

[iv] Desnier and Robert identify this as a medal of Warin’s design, but misdate it to 1662. Ibid, 3.

[vi] It has been suggested that this coin represented Alcibiades and it was a later addition to the painting that made a covert reference to Louis de Bourbon prince de Condé (known as le Grand Condé) who had betrayed Louis XIV during the Fronde, defecting to Spain to fight against France with the Spanish Habsburgs. However, this theory has been disproven by radiography carried out on the panel in the early 1990s that has shown that it was was part of the original composition of the painting, ca. 1645, at which point Condé was celebrated as a hero for leading significant military victories for France. This led Jean-Luc Desnier and Evelyne Robert to surmise that the Alcibiades medal may have been selected for its aesthetic appeal, and rarity alone, see Desnier and Robert, “L’art de la médaille selon Jean Varin.” However, Mark Jones has recently presented a convincing case that this medal was thought to represent Alexander the Great. Mark Jones, “Some aspects of the Medallic History of Louis XIV” in Médailles du Louis XIV et leur livre (forthcoming, 2015)

[ix] The inventories of Louis XIV’s cabinet at Versailles show that the medals were arranged according to size, metal and era, see below for further detail.

View all posts by drrwellington

One thought on “Jean Warin teaching the young Louis XIV history by medals.”